Since time immemorial, human and creatures have traversed the “roads of the sea,” which are closely intertwined with the history of our planet as a result. In recent years, as illustrated by the likes of floating trash, trash washing ashore and the precipitous drop in aquatic resources, those roads have transformed into an overt indicator of the problems of climate change and environmental pollution.

How did mankind make use of sea currents and the wind to travel the ocean? By tracing the vestiges of the exchange and trade conducted by Asian and Pacific peoples with the Japanese peninsula that remain in the nation’s various coastal regions, one gains insight into the roads of the sea traversed in cultural exchange. Where does floating trash and its ilk come from, and where does it flow out to? Classifying trash that washes up ashore in each region and converting it into data gives us visibility on the roads of the sea traversed by floatage. Likewise, the movements of creatures who cross the ocean every season and the knowledge passed down to fishermen who depend on the sea for their livelihood as they pursue those creatures shows us the roads of the sea travelled by those marine creatures. Therefore, if we follow the “roads of the sea” through various cultural, historical and natural perspectives and visualize them on a single map, perhaps we will be able to form an actual visual of connections across our planet that cannot be seen by us. On Earth, forests, villages, rivers and the ocean are all connected. Humans, too, are a part of this planet. As we make our way down the vast “roads of the sea” in this project, we will look for forms of the sea in which mankind and nature co-exist, keeping our eye out for signposts to help us along the way.

On the earth 30,000 to 40,000 years ago, sea levels fell due to cooling brought upon by the Ice Age. In shallow seas such as the Tsushima Strait, the peninsulas and the continent were connected by land or were close to being connected. Our ancestors made their way to here from the continent through this road.

Rice and metalware were introduced from the continent during this era. This signaled the end of lifestyles centered on hunting, gathering and fishing that had continued since the Jomon period, forming a new society and culture as it did. The arrival of metalware also boosted production efficiency and considerably transformed people’s lifestyles.

The Kofun period of Japanese history was defined by progress in the domestic unification of the nation and the building of burial mounds (“kofun”) across it. People who made their way from the Korean Peninsula and continental China brought with them new technology in addition to numerous new forms of culture. These cutting-edge technologies that included ascending kilns (“anagama”) needed in the production of Sue pottery and smithing culture ushered in considerable change to people’s lifestyles.

Under the Yamato Administration and powerful clans, active exchange between the Korean Peninsula and continental China began to take place. Through this exchange, numerous forms of culture made their way across the Genkai Sea and were mutually incorporated by both regions. Materials indicating this exchange were excavated form burial mounds in Japan and the Korean Peninsula.

During the Nara and Heian periods, with the prestige of the nation at stake, external negotiations were conducted through Japanese missions to Tang China in pursuit of the culture of developed countries. In time, trade between Japan and the Song Dynasty began along with the commencement of the Kamakura period, as did private commerce with Chinese trade merchants. This commerce would continue even after China’s state title changed to Yuan. In the Muromachi period, trade began Japan and the Ming Dynasty commenced, and trading licenses (“kangofu”) were issued to recognize formal commerce.

A project spearheaded by students who regularly engage in beach cleaning activities will get underway in which they call out to regions across Japan to do the same and share various findings concerning the sea in each of those regions with the use of an online map representing a virtual Earth that can be freely accessed. When the people who gather online in that fashion connect in reality, there’s no telling what will rise to the surface. The project will also consist of discussions that incorporate academic observations and simulations. 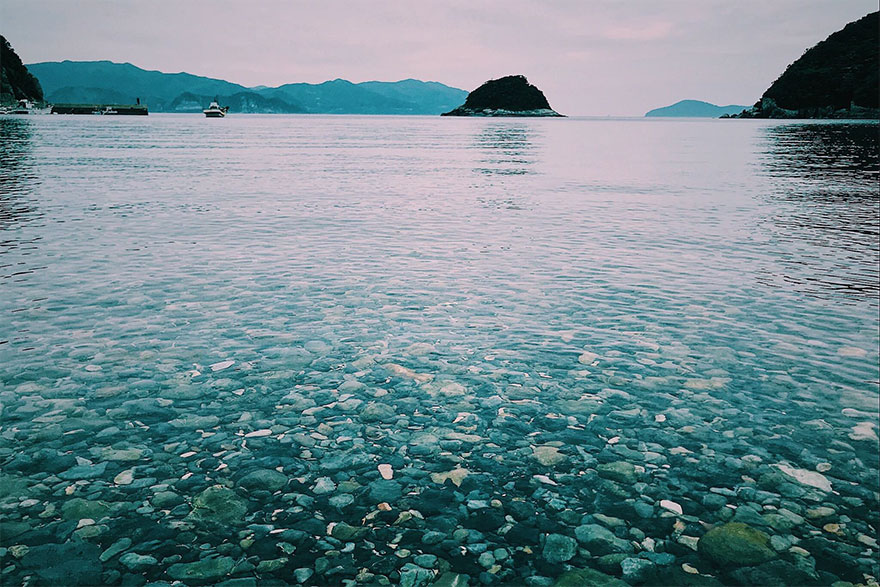 If you are engaged in beach cleaning activities somewhere in Japan, or are considering to be a part of such activities in the future, we highly encourage you to take part in a simple questionnaire and join this “#RoadsOfTheSea” project!

Please answer the below items and either register your responses directly on the GIS app or send them over email. （⇒ munakataclean@gmail.com）

◆ To register your responses directly on the GIS app, go here

In addition to works, we are also seeking plans to create such art featuring the names of localities in various places across Japan.

Please create art spelling out the name of the locality where you conducted beach cleaning using the garbage that you gathered there and send a photo of the resulting work over email. （⇒ munakataclean@gmail.com）

The works will be introduced on SNS at any time.