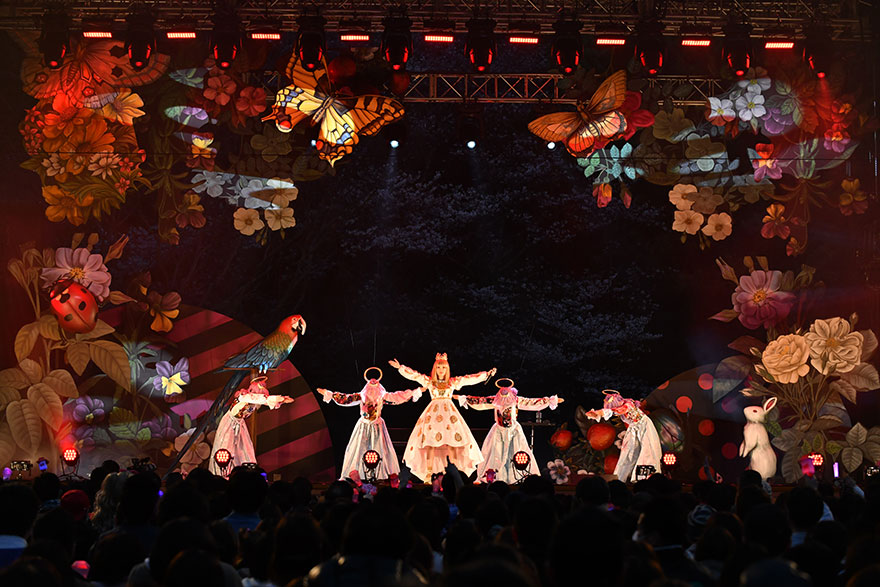 Enter the world of Kyary Pamyu Pamyu to see how the outlook on nature and awareness and sensitivity towards the divine that have been carried on by the Japanese people since ancient times have not been lost in today’s era. This program also features footage from the artist’s “Oto No Kuni Live/Maboroshi No Utopia: A Night at Izumo Taisha” concert.

Made major debut right after graduating from high school in summer 2011 with the release of her mini-album “Moshi Moshi Harajuku” on the Warner Music Japan label. Her first full album “Pamyu Pamyu Revolution” was released in May 2012 and reached No. 1 on the Oricon Daily Chart upon its debut as well as the top of the Japan iTunes charts and electro charts around the world. Subsequently continued her streak by embarking on her first nationwide tour, playing the Nippon Budokan solo, and performing on the annual New Year’s Eve television special Kohaku Uta Gassen. In her four world tours to that point, she drew over 100,000 attendees, a testament to the support she has both domestically and abroad as one of Japan’s leading pop icons and the attention that she has gathered worldwide. Announced her “Oto No Kuni Live Tour,” which she would perform at locations around Japan with a connection to its history and traditions, in 2019. The first concert of that tour brought her to the Japanese heritage site “Izumo Taisha,” where she performed a special one night-only show entitled “Maboroshi No Utopia: A Night at Izumo Taisha.” Her second show of the tour took her to “Minamiza,” the theater in Japan with the longest history that dates back to the Edo period, where she put on a collaborative concert that featured traditional kabuki dancing. Her freewheeling attitude that belies her cute appearance and richly-original forms of expression continue to captivate fans.